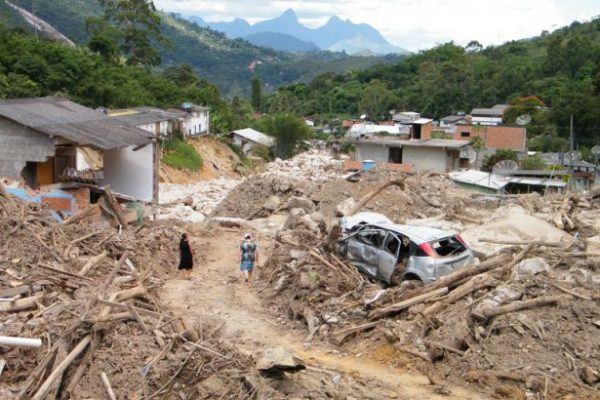 By Jennifer Mitchell, Director of Strategic Initiatives, Global Footprint Network and Mathis Wackernagel, Ph.d., President, Global Footprint Network A few weeks ago, WWF, Global Footprint Network and the Zoological Society of London issued a comprehensive report on the health of the planet. The 2010 edition of the Living Planet Report (available here in Portuguese) shows human demand on resources outstripping sustainable levels at an alarming rate. The report shows Brazil leads the world in ecological wealth. But can it protect its greatest asset? According to Global Footprint Network's latest figures, Brazil is the country with the most total biocapacity, a measure of the amount of resources its ecosystems produce. Some 14 percent of the world's total biocapacity can be found within the Brazil's borders, and the biocapacity available per person (9 global hectares) is more than four times the world average (1.8 gha). Brazil is also one of the countries with the greatest positive balances between its biocapacity and its Ecological Footprint, which measures the resources a population demands to produce what it consumes and absorb its CO2 emissions. The value of Brazil's natural capital becomes especially clear given the global context. In 2007, the most recent year for which data are available, humanity's total Ecological Footprint exceeded by 50 percent what nature can sustain, according to the Living Planet Report. Put another way, it now takes 18 months for nature to regenerate the resources consumed and absorb the CO2 emissions generated by a year of human activities. To understand how such ecological overspending is possible, it is helpful to use a financial analogy. When humanity's Ecological Footprint is lower than biocapacity, it is as though we are living off of the interest from nature. Once we go beyond that, we begin depleting our stocks of ecological resources and accumulating waste -- essentially drawing down our principal. Just as with financial assets, this can go on for a period of time. But the urgent problems we face today, from climate change to the plummeting biodiversity detailed in the Living Planet Report, are signs we have reached the limits of our overspending. In a world facing a growing resource crunch, Brazil's biocapacity offers it a significant advantage -- both its in ability to be a supplier to other countries and to provide well for its own citizens. But there is a catch. Brazil can only realize these benefits if doesn't deplete the source of its wealth -- if it manages, in essence, to live off its interest. Trends show the country is currently headed in the opposite direction. At 2.9 global hectares, the Ecological Footprint of the average Brazilian is already larger than the global average, and considerably greater than the 1.8 available per person on the planet. (Click here to explore how Brazil's Footprint compares to that of other countries.) "The reduction of inequality with increased purchasing power of the Brazilian population is a positive achievement," Secretary General of WWF-Brazil Denise Hamú said in response to the report. "However, we also have to face a major challenge: to grow without depleting our natural resources." Brazil’s growing population presents another challenge. The country’s population has more than doubled since 1961, from 75 million to 190 million, while total biocapacity has not changed significantly. The result is that the amount of biocapacity available per person, while large, is now less than half of what it was four decades ago. The good news is that, as the quality of life in Brazil has improved, the per capita Ecological Footprint has not risen at the exponential rate that it has in other countries - - in particular those of Europe, North America and the Middle East. The country has a relatively low Footprint for its level of human development as measured by the UN Human Development Index, which rates countries based on attainment of factors such as longevity, educational attainment and income. This suggests that it is developing with a lower level of resource-demand than some other countries. Brazil's challenge is to create new growth opportunities for the country while protecting the ecosystem services that are the foundation for its economic development. If it can keep a balance between what is consumed and what nature can provide, it will be the rising star of the 21st century. If not -- well, it's important to remember that, unless one takes care to protect one's assets, even the richest among us can end up broke. →

Development that respects ecological limits: a call for the new Administration

Ruling Workers’ Party candidate Dilma Rousseff, who is expected to win handily in the first round of Presidential elections, has been bullish about Brazil’s continued prospects for robust economic performance. With policies that focus on smoothing the way for industry and building on the country’s oil-based revenues, she has expressed confidence that the current 7 percent growth rate could be seen not as a high-water mark but as the new normal. For Brazil to enjoy continued prosperity, however, it must protect a key asset that has helped secure its rising position in the world: its vast ecological wealth. Development and prosperity are worthy goals. Bringing people out of poverty, creating opportunity and minimizing the gap between rich and poor are clearly among a government's most important mandates. The key is to take resource constraints and biocapacity into account -- otherwise, prosperity is destined to be short-lived and subject to reversal. Development that follows a sustainable path produces a clear win: for the economy, for the environment, and for the long-term well-being of the population. At Global Footprint Network, we come to leaders with a simple message: maintaining natural wealth is not something they must do for the good of other countries, but for their own. Nowhere is this more true than Brazil. With its booming economy and growing population, the country is at an important crossroads. Will it grow in a direction that maintains one of its most valuable assets? Or will it place that asset at risk? As previous readers of this column will know, Global Footprint Network’s research tracks nature’s supply against human demand the same way a bank account tracks income against expenditures. We compare countries’ Ecological Footprint – the amount of land area it takes to produce the resources their population consumes and absorb their carbon dioxide emissions – with biocapacity, the amount of resources a region (or the world) is able to produce. Brazil has the largest positive balance between the amount of resources its ecosystems produce and the amount its population demands for its own use. Its natural wealth also supports a critical part of its economy: agriculture counts for about 6 percent of the country’s GDP, and 36 percent of its exports. Even so, those reserves are not limitless. The amount of biocapacity available per person has declined steadily over the last four decades, with the gap between Footprint and biocapacity narrowing to less than half what it was in 1961. Brazil is not alone in these trends. Many nations around the world have seen their once-large ecological surpluses shrink almost entirely away. Ecuador is one Amazon-basin nation that has recently taken action to reverse this trend, its National Plan calling for maintaining its Footprint within biocapacity by 2013. Staying in the ecological black requires careful management of ecological assets. That includes taking resources into account in areas where they have not always been considered. Infrastructure is one key example. Rousseff helped launch Brazil's Accelerated Growth Program (PAC) promoting investment in the areas of housing, transport, energy and water resources. Such infrastructure has a long life span, and poor choices can lock a society into a resource- intensive path for decades to come. As Brazil looks to put significant sums toward expanding PAC and building the next generation of infrastructure, its leaders must consider whether they are investing in opportunities that are sustainable in the long term or in resource traps that will make such development difficult. As a champion of economic growth, we would expect Brazil’s new leadership to keep careful track of its fiscal balance sheet. No less attention should be paid to management of the country’s ecological assets. It is fair to assume a downward trajectory in GDP would keep advisors working late into the night on developing strategies to reverse the trend. Similarly, having access to solid resource accounting metrics will help Brazil's leaders navigate some of the tough resource choices they will face in coming years. If the new administration is to be successful in its promise to deliver an improving quality of life for Brazil’s citizens, it must do so in a way that protects the underlying assets that are the basis of its economy – and the well-being of all its people. *Jennifer Mitchell, Director of Strategic Initiatives, Global Footprint Network →

Garantindo a prosperidade do Brasil